Every time I write 1 of these Minigame rants, I hope, I pray, I plead with merciful and holy Palutena herself, that this will be the last. That I’ll never again encounter an RPG minigame so detestable and frustrating that I must document my uncompromising loathing for it. That game developers will finally learn to stop shoving these inexplicable, time-wasting obstacles into their creations that interrupt what might otherwise be a successful narrative flow. That it’s all Gwent, Triple Triad, and Tales of Dragon Buster from here on out. Alas, it is a sad fact that while she is good and wonderful, Palutena is also highly whimsical and mischievous, not to mention fictional, and so, here we are once more.

Among certain other traits ineptly copied from Kingdom Hearts, Sweet Lily Dreams is infested with puzzles and minigames which range from the slightly tolerable (mixing potions with Dr. Jekyll) to the infuriatingly tedious (swamp island hopping). By far the biggest pain in the ass, however, is the very first puzzle in the game, in which you must rotate several golden rings to correctly form an image out of a series of angled symbols.

And it is fucking bullshit.

This is a pretty visual thing, so here’s a video of someone else doing the puzzle, to show you how it basically works--you needen't watch the whole thing being done if you somehow aren't utterly enthralled by the action and excitement of a rotating puzzle ring, but you can at least get the idea: https://youtu.be/eAzBd1qZbPQ?t=11m36s

The idea is that you’re trying to get it to look like this: 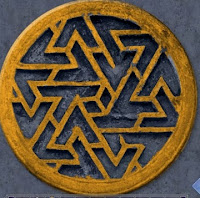 This sounds simple enough, but one quickly finds that it’s incredibly frustrating, for a number of reasons. First of all, the degrees of articulation that these rings have is way, way too fine. This isn’t like some puzzle where you get a limited number of directions that each piece can face in. If that were the case, if each piece could only face in, say, a dozen directions, then this wouldn’t be so bad. But because you can rotate these things to such a degree of detail, that means that actually locking aring into the exact right position is a long, tiresome ordeal of trial and error. You can have everything lined up in a way that really does look right, but because the minigame requires such an exact position for every ring, you could be off just a few tiny degrees, which is enough to keep you from passing. You need to get it pretty damn close to pixel-perfect with the positioning in this minigame, and when you combine that with such a complete control of each ring’s tiniest movement, you’ve got the potential for huge frustration.

Second, look at that damn image, and watch the video. The image you’re trying to form is intricate, complex, and overly confusing. It’s all a bunch of interlocking Starfleet triangles and lines that have barely any distinguishing differences from 1 area of the image to the next. It’s hard to distinguish a useful point of reference in the correct image to start your reconstruction from, and because it’s all the same color and a bunch of similar shapes and angles, it’s a constant struggle to figure out whether you’ve actually formed the right lines and shapes, or whether you’ve just made a bunch of triangles that are similar to what you’re supposed to have made, but not quite it. You know you’ve got something about this wrong, because the game hasn’t ended, but since everything needs to be so damn exact, as I stated above, you’re never entirely sure whether you’re just a tiny bit off because it has to be exactly right, or whether you’re completely off and just can’t tell because all the goddamn yellow triangles look the fucking same!

Third, and most damning, this is all assuming you even know what the fuck this Telly Monster wet dream is supposed to look like in the first place. The game itself sure as hell doesn’t let you know! Seriously! You’re thrown into this damn minigame blind, clearly expected to form this pixel-perfect picture from nothing more than being able to determine which lines connect perfectly where--except that everything looks the fucking same! Not to mention there are pieces of the correct image that stick out without connecting to anything, so if you’re working with the perfectly rational assumption that everything should connect together, you’re never going to get it right. I haven’t found any image in the room with the puzzle of what it’s supposed to look like, there’s no written clue anywhere (not that you could really describe this image through text anyway), there’s no locking sound or chiming or anything when you’ve slid 1 of the rings into the right position...you’re just going in totally blind on this. Did Roseportal Games actually intend for players to experience the rest of the game? I nearly put a fist through my monitor just trying to win at this damn minigame, and I was working with the solution image provided in the Sweet Lily Dreams walkthrough! I can’t imagine how someone was actually supposed to get past this point of the game organically!

The placement of this minigame is utterly idiotic, I’d like to add. I mean, come on, Sweet Lily Dreams has almost a dozen different minigames/puzzles in it. Why pick this obstacle in particular to be the introduction to the idea that this is a minigame-heavy RPG? I may not have participated in nearly enough football games to suffer the brain damage necessary for me to say that any of SLD’s minigames are enjoyable experiences, but any of them would have been a better choice as an opener than this fucking golden ring bullshit. By the time you hit upon this thing, you’ve been playing, what, an hour? Maybe not even that. You’re not invested enough in the game that you have any reason to persevere over a minigame this intensely frustrating. I mean, okay, clearly I did, but you have to remember, I played Sonic Chronicles: The Dark Brotherhood from start to finish: I’m clearly an idiot. At the very least, Roseportal Games should’ve made this ring turning nonsense one of the last minigames, hit you with it only after you’d committed too much time to this subpar RPG to turn back. Anyone with a healthy possession of common sense and without an RPG obsession will seriously consider quitting on an RPG where this kind of crap is dumped on them right from the start.

At least you only have to do this stupid shit once in the game, unlike Spheda or most fishing games. Nonetheless, Sweet Lily Dreams’s golden ring rotation is easily 1 of the absolute worst mandatory minigames I’ve come across in over 350 RPGs. I knew this game was supposed to involve themes of abuse, but I thought that just meant, like, as part of the plot and stuff. I didn’t realize that Sweet Lily Dreams was going to have the players experiencing it firsthand!
Posted by The RPGenius at 8:08 AM