Thanks to good sir Jolt for giving this a look-over to resolve some concerns I had with it.


Old Vs. New, the eternal debate. Which was better, the original Batman movie by Tim Burton or the new ones? Which did you prefer, The Real Ghostbusters cartoon from the 80s, or the 90s Extreme Ghostbusters? Which is more annoying, a heavy-handed dose of guilt ineptly dumped on you by a rapping, psychotic bat, or by a blue cat alien thing?*

The question of whether things were better in the old days or are better now is one which even the relatively new video game industry is besieged with, and that definitely includes the RPG genre. Although there are plenty of examples of this, the RPG Old Vs. New argument I hear most often is about the Final Fantasy series. And good God, it is getting tiring.

The first problem I have with it is the way people argue it. Regardless of what camp they're on, they seem to believe that ALL games that fit into their school must be good simply because of the time they were made. They're always making blanket statements, like "The old games were better because they didn't let graphics distract them from characters and plot!" and "The new games look better and are more creative!" The problem here is that the blanket statements are just never entirely true. You can't say that the old school games had superior plot and character focus when the old school of Final Fantasy features the bland and generic Final Fantasy Mystic Quest, and the boring and outright stupid Final Fantasy 5. Nor can you say that the new games necessarily look better--the sprites and backgrounds may be slightly more advanced in Final Fantasy Tactics and Tactics Advance 1 than in the SNES titles, but it's not by much, and in the end it's still super-deformed little blocks marching around on a simplistic background--or are more creative, given the insanely dull Final Fantasy 12, whose few plot twists are just old devices taken from other rubbish (really, Basch? You're going to pull the soap opera "My Evil Twin Did It" thing?).

It's not that I don't think some installments in the series shouldn't be compared and contrasted with others (or even RPGs outside the FF series). It's just that the people who make these Old vs. New arguments about Final Fantasy never seem to be interested in actually debating the merits of the games, nearly always make the stupid generalizations I mentioned above, and just appear to want to find something to be negative about without actually thinking about whether the negativity is justified.

The next problem I have is how the devil you even qualify what constitutes Final Fantasy Old School from New School. Traditionally, Old School is everything made before Final Fantasy 7, and Final Fantasy 7 begins the New School. Well, this might have been a fair distinction to make back in 2002 when FF10 was brand new, but at this point in time, Final Fantasy 7 is over 10 years old. Not only that, but it was the first game on the Playstation 1, a console from 2 system generations ago. You can say that FF7 took the series in a totally different direction, but most FFs are departed from the rest of the series in their styles, and that original FF style has returned for several titles since FF7's release--FFT, FFTA1, FF Crystal Chronicles, FF9, and so on. Hell, I'd say that FF12 took the series in a new direction far more drastically than FF7, creating a strongly different hybrid of fantasy and technology that was totally different from all previous games' mild mixes of the two--not just that, but FF12 also added a heavy dose of MMORPG style with its battle system, a greater step beyond previous installments in the series (save FF11, which IS an MMORPG) than FF7 was from FFs 1-6.

So if it's not accurate to judge a game over a decade old as being the turning point between old and new, where DOES the line fall with the series? FFT, a distinctly medieval-style game akin to the traditional idea of "old school," came out soon after FF7. FF8, another of the traditional "new school," is also over 10 years old. FF9 can't possibly count because it deliberately molded itself to fit the old Final Fantasy style. So is FF10, first Playstation 2 Final Fantasy, the turning point now? Because then things seem really off--the Old School will include FF7 and 8, which are radically different from the rest of the Old School, the New School will be composed of only 3 (soon to be 4) all-important numbered titles to the Old School's 9, and practically half of the New School's Final Fantasies are spin-offs of Old School titles (FF7, most notably). Not only that, but with FF11 being an online RPG, and FF12 being a mix of Star Wars, online RPGs, and Final Fantasy Tactics, making it, as I mentioned, more drastically different from practically every other FF than even FF7 was from its predecessors, the entirety of New School is a confused jumble of dissimilar styles and directions.

So the School arguments don't work because their respective games don't have enough in common regarding quality to qualify for blanket statements, and because there's no logical spot to draw the line between Old and New. But that's not even the most important reason this heated debate makes no sense! The biggest reason is that the quality of games on each side is all over the place. Seriously, how can anyone say that New School is better than Old School when newer FF games include the lethally boring Final Fantasy 12 and the unspeakably repulsive FF10-2? How can you seriously say that Old School is boring when you have the imaginative, brisk storytelling of Final Fantasy 6? How can you say that the writing for the New School always sucks when it has the deep and dynamic characters of Tidus and Yuna, and the great themes of FF9?

I mean, I know I've said SquareEnix sucks lately, and I'll stick by that statement, but I'm not saying that the games are bad because they're new or all conform to certain new trends--they're bad because they're bad on an individual basis. Being new or old has no bearing on whether the game is good or not. When (or maybe I should say if) SquareEnix makes a good new Final Fantasy, I'll be happy to remark upon it as such--hell, I actually quite enjoyed the recent Valkyrie Profile: Covenant of the Plume, so there must be SOMEONE in the company still who has some talent. But dismissing a Final Fantasy (or any other RPG) because of the year it was made? That's ridiculous.

Old School Vs. New School with the Final Fantasy series is stupid, or at least the people debating it are, along with their rationales. I've got a visual aid here that, I feel, properly and mathematically describes this situation, borrowed courtesy of good lady Iris Amergin, or Hezul, or Zionga, or whatever she calls herself (woman changes screen names way too often), and altered just a bit. I feel that it is as proper a close to this rant as is possible. 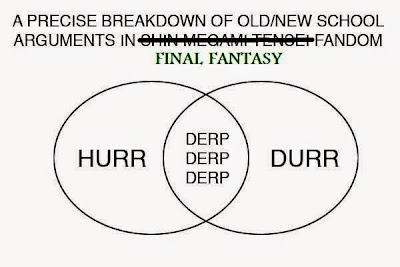 * And while we're at it, which is a more evolutionarily unsound creature: a lizard that sings loudly to all its potential prey within hearing distance about how it's hungry, or a bug whose escape mechanism is to jump up and spin around while glowing neon pink against a predominantly dark blue forest background?**

** Yeah, yeah, I know. You've probably heard about a million jabs at Avatar for being Ferngully meets Disney's Pocahontas meets a million other times you've seen the same story played out. So sue me; I don't feel bad. Millions and MILLIONS of dollars were spent on Avatar that could have gone to worthy causes--at the very least, better movies--and what's the finished product? A movie with a plot so unoriginal and hackneyed, characters so shallow and stereotypical, and a romance so generic and unexamined, that comparing Avatar to Ferngully and Pocahontas is an insult to THEM, not it.
Posted by The RPGenius at 5:06 PM