It has been said of both misery and politics that they make strange bedfellows, but I must contend that they are not alone: RPGs, too, join them.

I mean, honestly, does it strike anyone else as weird that you can, while walking around any given dungeon or outdoor environment in an RPG, encounter a skeleton, a bat, and a giant carnivorous plant all within 3 feet of one another, and that they have all formed an unspoken pact to work together as a single, cohesive battle unit to take out any random adventurers that happen to pass by? I mean, it’s not just that your party happened across a bunch of assorted wildlife/indigenous non-humanoids/robots/ghosts/etc at 1 location--it’s that they’re all cooperating specifically against you. 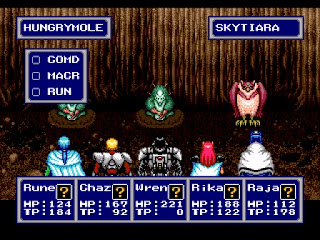 Why are these moles and this owl working together? Aren’t owls usually the natural predators of small mammals like moles? That bird should be concentrating on catching those moles as its dinner, not teaming up with them to assault random androids and aliens that happen to be close by. Furthermore, if the moles are, indeed, capable of working as a team with other non-moles, shouldn’t they choose, in this scenario, to ally with the adventurers, who, regardless of how threatening and unwelcome, are at least not a daily threat to the moles’ existence? 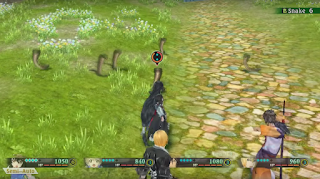 It may seem more normal for a bunch of the same kind of animal to work together, and I guess it is, but at the same time, when has a group of snakes ever come together to cooperate as a team toward a common goal? Snakes do not have thinky-thinky parts advanced enough to understand the concept of teamwork, let alone engage in it. The decision to defend their territory (and that really has to be the only reason they're on the attack, because I don't care how far their jaw unhinges, there's no way those things are gonna manage to eat Velvet and company) should make each of these serpents at least as antagonistic toward their fellows as towards the adventurers--more so, really, since the other snakes are the ones who would compete for the same resources.

And that’s just the oddity you can encounter with semi-normal animals. At least as often as you’ll encounter wolves, bears, eagles, rats, and unusually aggressive rabbits, you’ll get match-ups like this one: 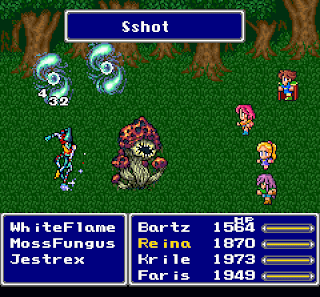 Why is this jester out in the middle of the woods, and more pertinently, why is he working with animated, concentrated, floating spirits of fire? Even better, how is he working with them--how is said fire self-aware enough to determine that it wants to battle alongside this particular humanoid but not the other 4? Why do the fire and the jester want to murder these random explorers to begin with? Was this some sort of extremely private Tinder hookup, and they’re just pissed off at the heroes having caught them in the act? What does the giant fungus get from all this?

RPGs are weird, man.
Posted by The RPGenius at 8:08 AM